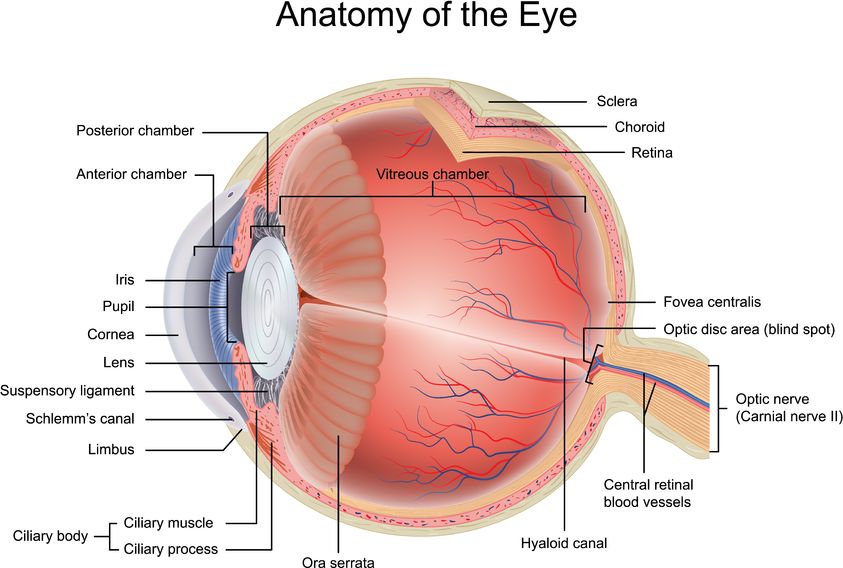 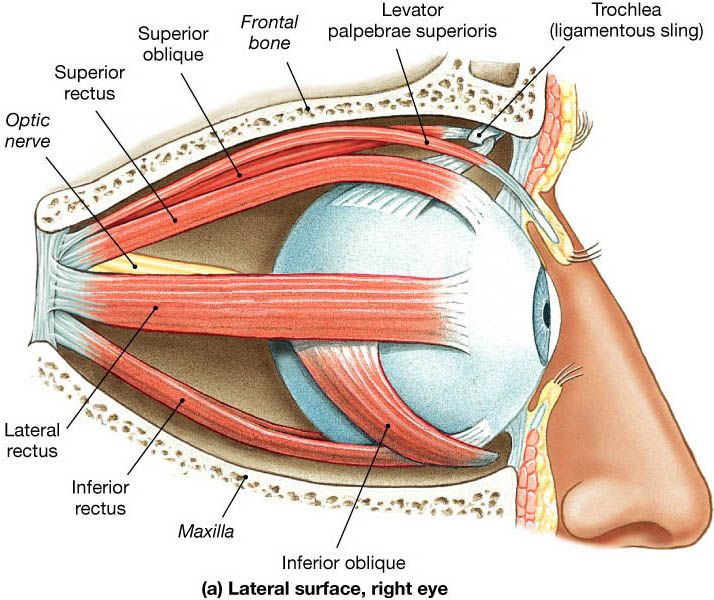 The eyeball is 24 mm wide. The eye acts in a similar way to a video camera. The cornea, pupil and lens generate a sharp picture of the surrounding view on the retina. The lens changes its shape automatically, and the corresponding muscles alter the size of the eyeball, which allows for generation of perfectly sharp picture on the retina.

Sclera – protects the eye against mechanical damage. It has eye muscles attached that move the eyeball. In the rear side of the eye, the sclera is crossed by the optic nerve and blood vessels.

Iris - located on the front side of the eye, behind the cornea, is a circular membrane which has an aperture inside. This aperture, called the pupil, lets the sunrays enter the eye. The iris has smooth muscles that constrict or expand the pupil. This process happens involuntarily and is aimed at adjusting the amount of light that reaches the eye according to the light intensity of the environment. It is known as the adaptation of the eye.

Lens – located behind the iris, has a transparent, oval structure. Its function is to further refract the light rays crossing the pupils. The lens can change when we are looking at the objects located near or far from the eye. This ability is known as the accommodation of the eye.

Macula lutea – a spot on the retina, characterized by the best visual acuity, located on the visual axis. It has the densest concentration of cone cells, and no rod cells. 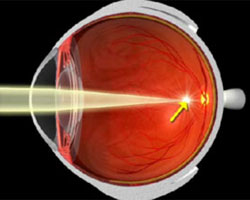 Short-sightedness is the most common visual defect which affects nearly half of human population in the world. It starts with the inability to see clearly the objects that are far from us. It is frequent the case, especially when we have begun to wear the glasses, that the defect becomes more serious by on average of 0.5-1 diopters per year.

In physical terms, it can be described as a disproportion between the power of the eye optical system and the eyeball’s length. In the case of this defect, the power of the eye optical system is too high or the eye is simply too long, which causes the picture of the objects located far away to blur. The objects located in a short distance are seen by the person suffering from this defect clearly.

It is a common practice to use the diverging corrective glasses or contact lenses to improve the acuity of the myopic. Their optical power is given in diopters adding the minus mark. In the case of high myopia in the advanced age, we may suffer from the degeneration of the choroid, retina and vitreous body. In most cases, myopia develops in the period of adolescence. 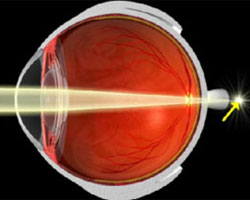 With the possibility to add the power from the eye optical system (accommodation), the far-sighted person usually sees clearly the objects located far away, and complaints the most when needs to employ the eyes to see the near objects. Far-sightedness becomes more intense in the advanced age (presbyopia) as a result of progressing impairment of the eye accommodative system due to lower ability of the ciliary muscle and worse eye lens flexibility.

It is a common practice to use the corrective glasses or contact lenses to improve the acuity of the myopic. Their optical power is given in diopters with the addition of the minus mark (f. ex. plus 3 diopters).

Presbyopia is a progressing inability of the eye to change its power. It is a process of natural aging of the eye and affects everyone regardless of whether they had a visual defect earlier or not. The persons in the age of 40-45 begin to have problems with reading, especially a small-font print, which forces them to read in better lighting conditions and set the text farther from the eyes.

The signs of the early presbyopia are more severe in the evening when the eyes are tired. This developing process of eye “aging” leads with time to the inability to read without special glasses. Presbyopia can be corrected by using bifocals or progressive glasses.

Astigmatism is a defect that lies in the distorted vision as a result of asymmetrical eye cornea. If the corneal curvature radius in the vertical plane is different than in the horizontal plane, the light rays falling onto the various parts of the cornea refract differently. This makes the patient see blurry. It is common that, when showed the sign of a cross, the patient sees clearly only one of its arms – the vertical or horizontal one. Such astigmatism is known as regular, and in this case the eye has two focal points. To correct the defect, the glasses with cylindrical lenses are used. The human eye has normally the so-called physiological astigmatism of up to 0.5D that does not require correction. The eye defects are often caused by the uneven corneal surface, which results in the irregular astigmatism with more focal points. The correction of such a defect requires the use of hard contact lenses.

People with good vision can effortlessly direct their eyes onto a given object by convergence movements. At short distance (for example: when reading a book), the eyes set automatically to the inside to maintain the sharp image. At long distance, on the other hand, the eyes set almost parallel. In the dark environment where our pupils are widely open, the depth perception is very low. In the bright environment, with small pupils, the depth perception is high and we see with greater acuity.

Thanks to the eye convergence we have a sense of deep perception and see the world in three dimensions. The brain automatically superimposes the images from each eye creating one three-dimensional picture. If you have problems with eye convergence you will not determine correctly the distance from the objects. Natural convergence gets weaker with time often occurring along with the presbyopia, therefore it important to examine your eyes and in the case of the defect, start the practice recovering the correct eye convergence. Fortunately, the exercises for the recovery of natural eye convergence give very good results, so it is good to give them a try if we face the convergence problems. The most serious convergence problems are experienced by the persons with a squint. 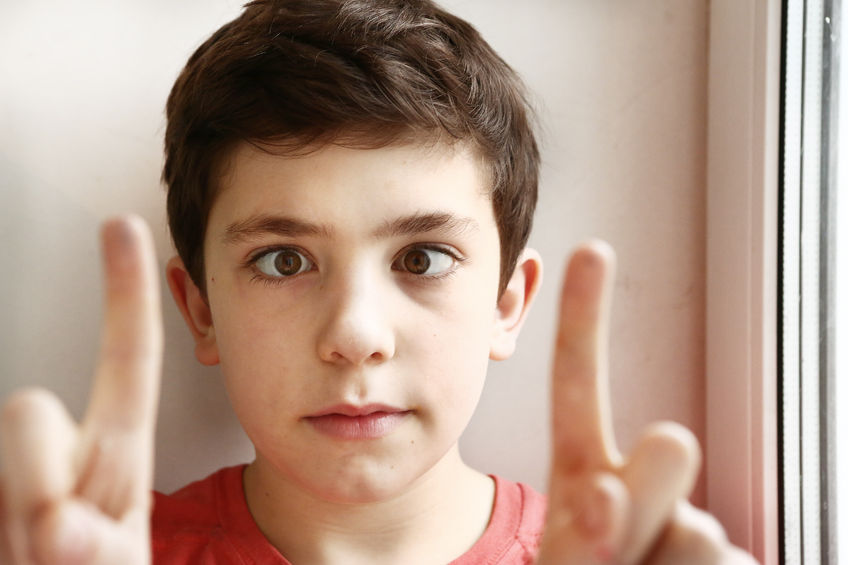 Moving of the eyes in all possible directions, which determines the observation of moving objects in the widely-understood perception field, depends on the proper functioning of the external eye muscles. In the proper conditions, both eyeballs are set parallel and under the so-called process of fusion, of the two retinal images in the primary visual area, one image is created that has the features of stereopsis, i.e. stereoscopic perception of solids. The fusion process occurs in the primary visual area and consists in superimposing and merging of the two retinal images (from the right and left eye) into one stereoscopic perception. The squint is an incorrect setting of both eyeballs. This is due to the imbalance of muscles with the abnormal retinal correspondence or loss of binocular vision. The squint may give rise to the amblyopia (“lazy eye”), the impaired visual ability of one eye.

According to the direction, we can identify the following types of a squint:

In most cases, the internal rectus muscle is excessively tensed, which causes the eye to turn too much to the inside. Such is the cause of almost 50% of cases of squint. Eye deviation may be small and almost invisible or so strong that the pupil nearly disappears in the eye corner. Since the deviation of the axle of the eye leads to a double vision, the brain suppresses the image of the squinting eye and weak sight occurs (lazy eye). Therefore, squinting always comes with a poorer vision in the eye.

Causes of a squint:

The easiest to recover from is the so-called hidden strabismus that manifests itself only when seeing with one eye, since with the binocular vision the sight converges and the squint does not occur. The treatment methods described here are mostly exercises for converging the vision and correcting the defect between the eyes.

Strabismus is frequent among children, but can also affect the adults. Its causes have been unknown. In most cases, the treatment begins not earlier than when the unclear vision is identified. The squint itself can be corrected with the prism glasses that align the divergence or by surgery. However, these methods often fail and lead to an even greater frustration of the users. Fortunately, the natural vision practice shows the rate of positive results of above 90%, so much higher than all other methods of optical and medical treatment. Children respond to the vision practice very quickly so that in most cases, they just need to perform daily exercises for several weeks.